The PRESTIGE-AF trial has officially recruited 150 patients, which is a fantastic achievement and brings us closer to determining the best treatment for patients with atrial fibrillation who have suffered an intracerebral haemorrhage.

We have asked the Principal Investigator, Dr Bernd Kallmünzer, a few questions about the trial:

You have recruited 5 participants to the trial, how have you achieved this?

Why do you think it’s important to offer participation in the trial to all potential patients?

“Decisions on treatment should be based on scientific evidence. PRESTIGE-AF helps to generate evidence on a clinical relevant question.”

Why do you think PRESTIGE-AF is still a relevant and important trial to recruit to?

“Currently available evidence is not sufficient to use OAC after ICH in all patients. The evidence for alternative treatment options (e.g. LAAO) is still weak.” 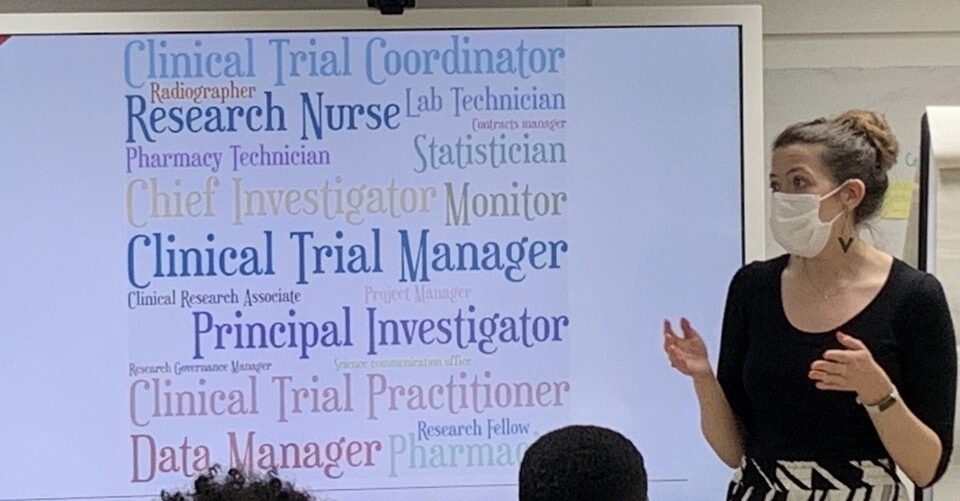 The session kicked off with an overview of the PRESTIGE-AF project, followed by a quiz titled ‘Stroke: Fact or Fiction’, prompting the students to question how much they really know about the disease and to bust common myths – as well as surprise them with powerful statistics, including the fact that stroke is ranked 2nd on the WHO’s list of leading causes of death globally. Those who got questions right were delighted to receive PRESTIGE-AF brain stress balls, which got everyone keen to give their input.

The students were then organised into groups to take on a creative challenge, tasked with coming up with ideas on how to engage people about stroke research, using the new facts and knowledge they’d gained earlier in the section. They were encouraged to think broadly, and the concepts they came up with showed that they took this to heart, with ideas ranging from TikTok videos featuring celebrities to an immersive exhibition that allowed people to walk inside a giant head that explored the range of effects stroke can cause.

Finally, the team discussed careers with the students, talking about all the different kinds of jobs that are involved in research aside from clinicians and researchers, with Kirsten, Emily and Harry discussing their own careers and how they got to where they are.

It was wonderful to see so many young people engaged and interested in learning more about stroke research, and their passion will continue to be inspiring.

The second event in Stroke Alliance for Europe’s #LifeAfterStroke series, this free webinar will explore intimacy and sex after stroke.

Registration is free and welcome to all. Register via the EventBrite page

Intimacy and sex are important. However, for many stroke survivors this is an uncomfortable subject with many struggling to come to terms with their ‘new’ body or identity and coping with the implications of this. Additionally, many healthcare professionals do not feel confident or able to talk about sex, or to know how to best advise and support patients or their families.  This session will share insights from several perspectives and suggest how we might begin positive and open conversations about sex. It also underlines the need for greater awareness about sex and intimacy after stroke.

#LifeAfterStroke is Stroke Alliance for Europe‘s series of interactive webinars focusing on bringing together the life after stroke community to stimulate debate and improve care.